What is Broken is Fixed and the Lame Walk - Maban Miracles

THE HOLE IN THE WALL

Children have great capacity to find fun in simple things. The children that I saw on a visit last week to one of the local primary schools were having great fun with the new hole that had emerged in their classroom. Made of sticks and mud these class rooms are common here, even though we have plans to build brick and mortar ones. The mud gets very dry and cracks eventually appear. Then when the rain comes the walls can just crumble away or as in this case a large section just collapsed allowing children to peer out at me with great joy. 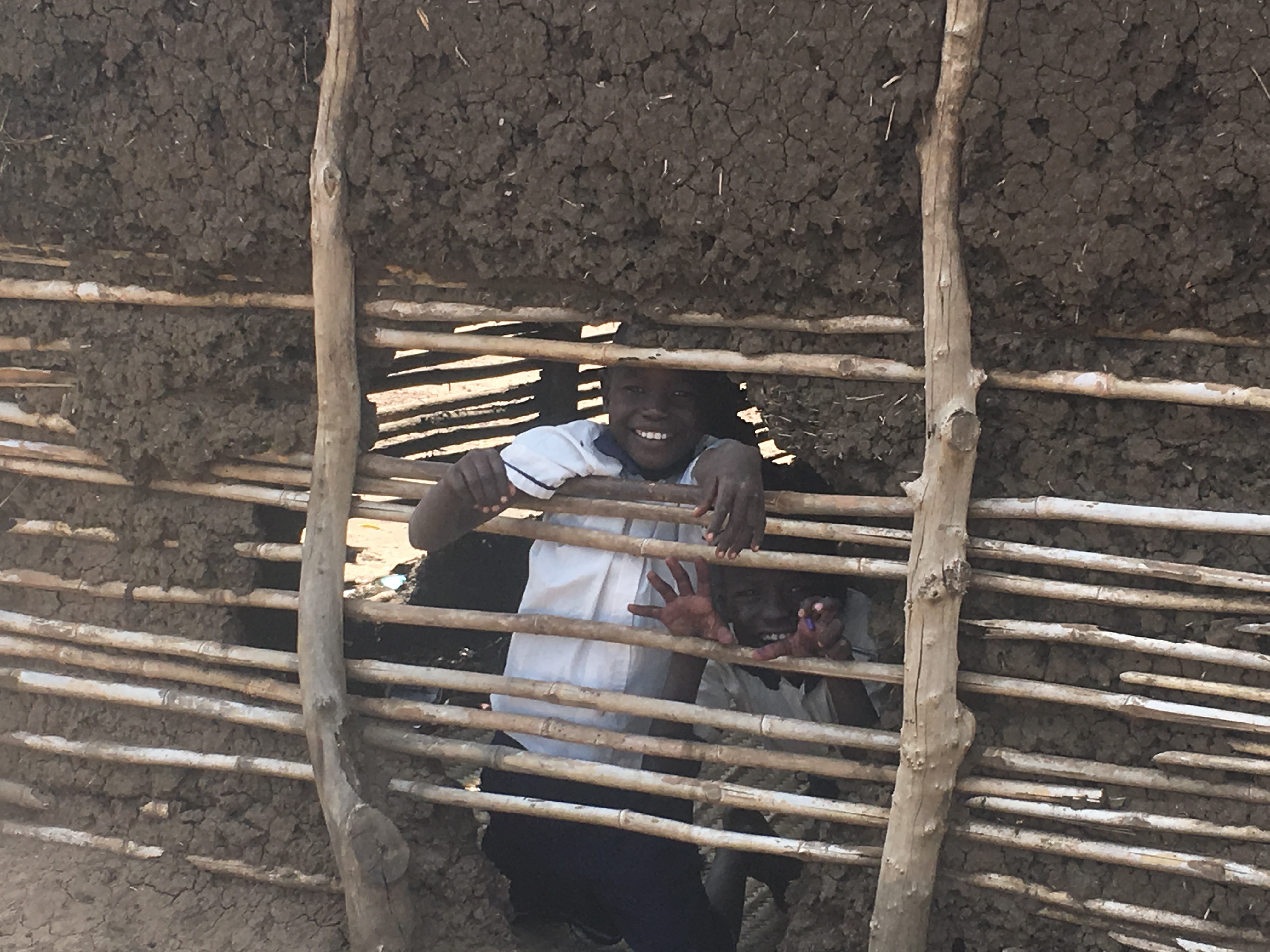 So over the weekend thanks to some local women who literally were not afraid to get ‘their hands dirty’ they began a total re-plastering or ‘re-mudding’ of the class room.  As you can see in the picture they did a fine job. What impressed me in the days when the walls of the classroom had crumbled away was the fact that it did not diminish the care or education the children received. Things went on as normal. Of course it was a hardship, but people here do not let hardship overcome their ability to get on with things. 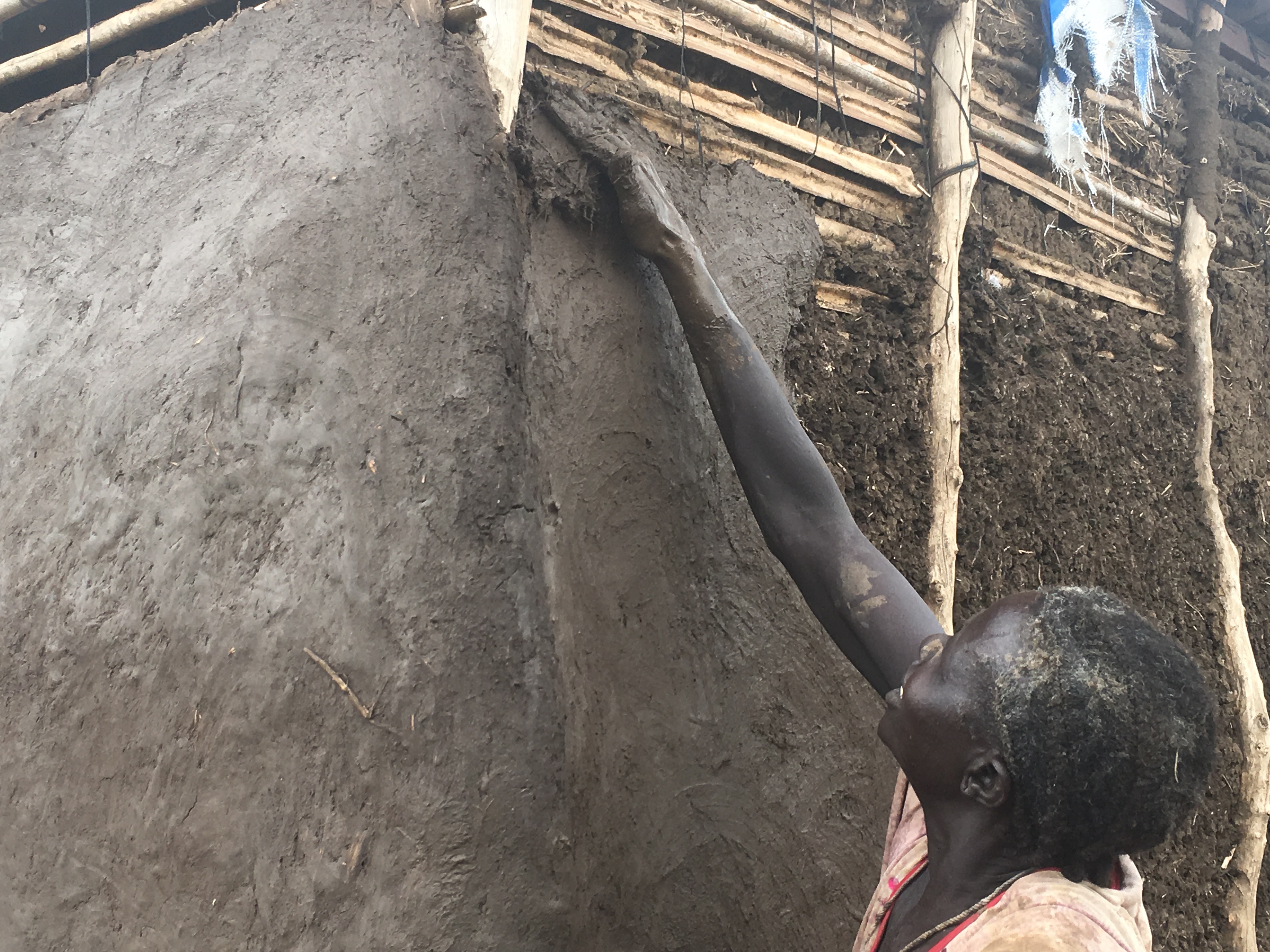 The repair cost about €10 in materials. We had to buy a certain type of garss that locals mix in with the mud to give it the right consistency. Theere was plenty soil on hand to mix in with the water and the grass and within a few days the class room was as new.  My limerick frineds will find it interesting to know that this school is located in a place call Jazera which means the Island. - and both Island communities - that in Limerick and in Maban have that common feature of strong identity and strong community. 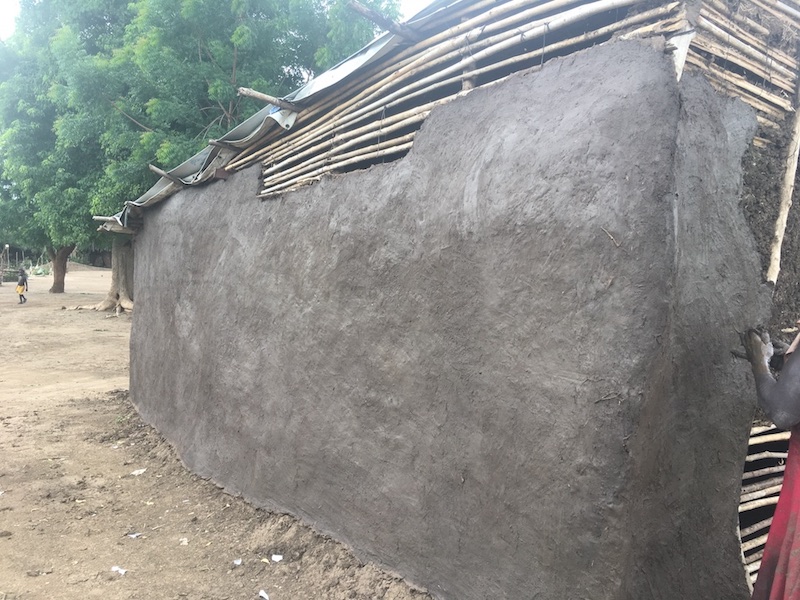 It seemed to be a particular week of 'fixing' what was broken. For weeks now I have been looking at some discarded wheelchairs and mobility devices that were under bushes in the back of our compound. Recently I discovered this young local man called Gabriel. Gabriel is a wiz-kid when it comes to repairing bicycles. He doesn’t talk much and can be moody, but he has an amazing talent and work rate when it comes to bikes.

So I showed him the pile of scrap and asked if he could conjure up maybe one or two working devices from the scrap. He didn’t say much but I could see he was grabbed by the challenge. At the end of the day instead of a heap of scrap the angel Gabriel had brought to life 7 functioning wheelchairs and mobility devices. A God-send to some elderly and disabled people who we work with. Only two remain in our compund now- the other 5 have all found welcome homes! 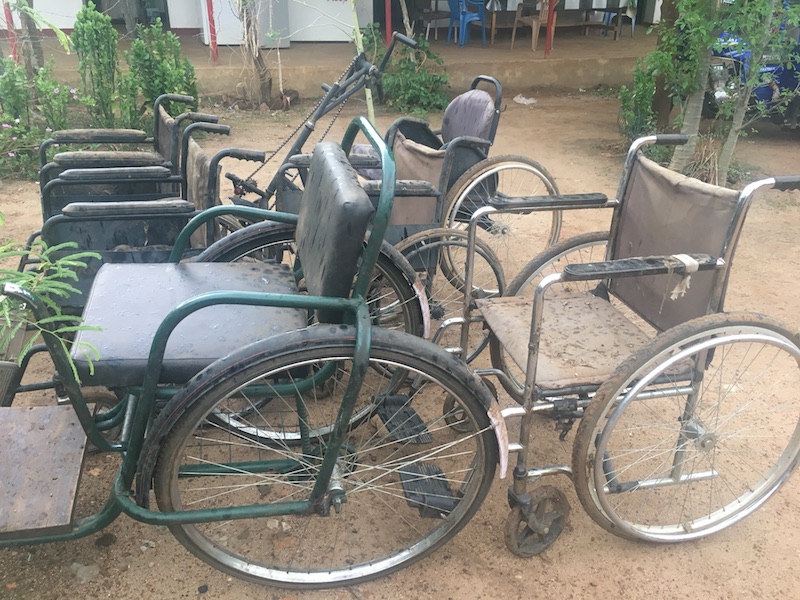 Working with children and adults with disabilities is one of the activities of our project. We had a remarkable little story during the week of a young boy's progress. I will share here the telling of the story by a fellow Jesuit called Francis. He was here in Maban for six weeks and left last Wednesday.  Over the weekend he sent me his account of what he saw:

While visiting homes with Boulis, one of home visitors who help Jesuit Refugee Service (JRS) minister to the 140,000 displaced people in Maban, I was surprised when the normally calm Boulis excitedly bolted towards a child who was also excitedly tottering to him. After a hug accompanied by squeals of delight – not just from the child but also from Boulis – they danced with the joy.

Boulis would later tell me that I should have danced with them because a miracle had just happened right before my eyes.

Resources are scarce in Maban. Food, medicine, and other supplies we take for granted have to be flown in. Relief workers have very little with which to give relief. A few months ago, JRS staff and volunteers received basic physical therapy training. Because physical therapy is what they can do, Boulis and his fellow volunteers dispense as much of it as they can.

Boulis had been visiting this particular child for several months because the toddler could hardly even crawl. As I expected, Boulis gushed about the wonders of physical therapy and how massaging the boy’s limbs had strengthened them. The week before, Boulis’ young friend needed support to stand. The day I came to visit with Boulis was the first time he saw the boy walk. 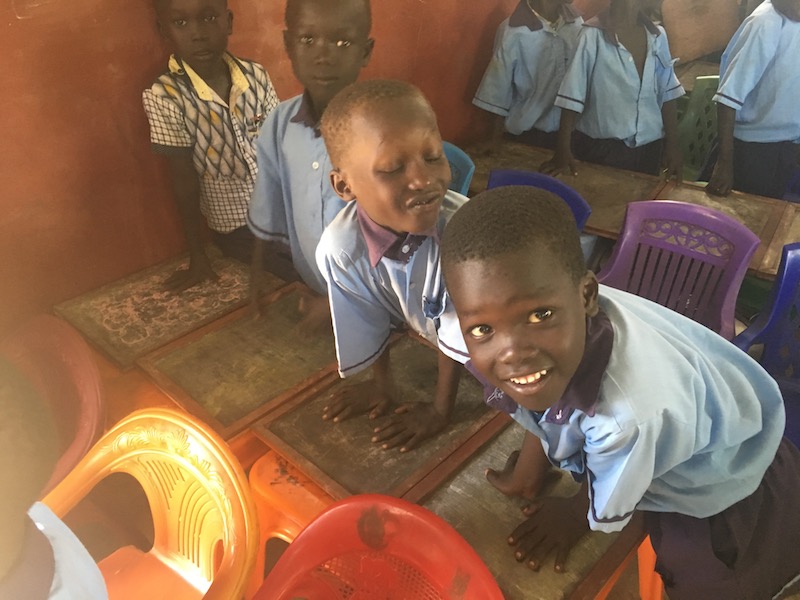 Many of you have been asking about the work on the roof and the cielings in the Teacher Training Centre.

I am glad to say that holes in the zinc roof have been patched. Suspended ceilings have been fitted in the tutors' living area and in the class rooms. ( see the before and after pictures below) Spaces where bats and other nocturnal creatures had used as entry points have been sealed. Our budget is nearly spent, but I am hoping we can give the area a fresh coat of paint ahead of the arrival of the intake of student teachers next week. 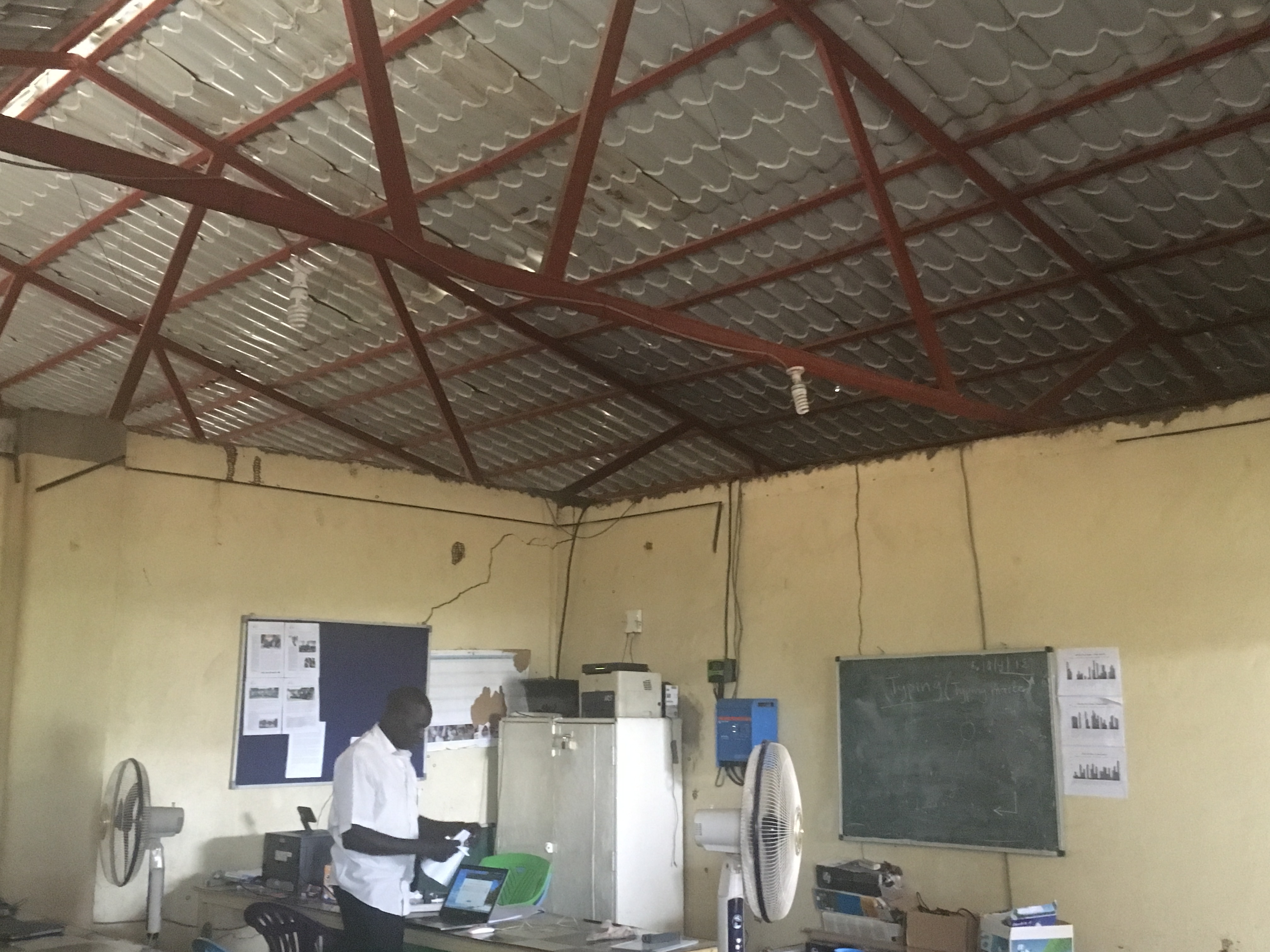 Trainee teachers will spend two years here at the end of which they will earn a certificate in Primary Teaching. Currently we have over 400 young men and women training as teachers. They are eager. One student, Simon calls to see me every other day asking when will the resdiental course start. He is 19, and he is looking forward to being in class and having access to our library. He will I think be an excellent primary school teacher.

I think this is one of the most important activities of this JRS project - if we can leave a legacy of well trained teachers then the next generation will have a far better chance of building this country and society -where minds are opened and talents nurtured.

The residential programme of teacher training also has the added dimension of bringing together a selection of the trainee teachers from across the ethnically divided groupings. They will live together under the one roof – minus the bats!  It is heartening to know that the leaders in their respective communities support what we are trying to do. They see the symbolic value of this little initiative. In a country at war, and tired of war, bringing people together in this way points to the future hope of the country 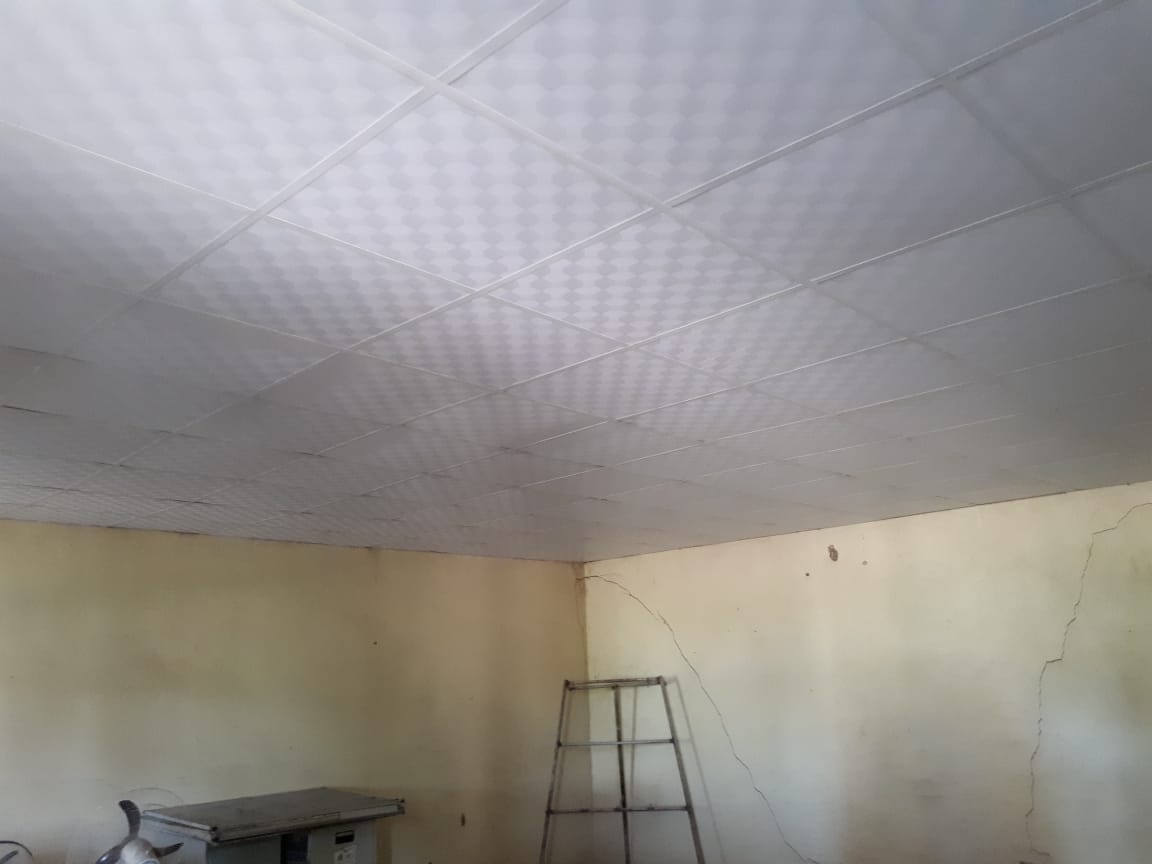 And finally getting back to where we starterd - the ability of children to find fun in the simple. I was in a class room on Thursday. It was a large class of about 70 pupils - not an unusal pupil teacher ratio. I was invited by the teacher to give.a short lesson on the Our Father. As one of a few white people in Maban- being whte or Kayaja is a novelty for local children. 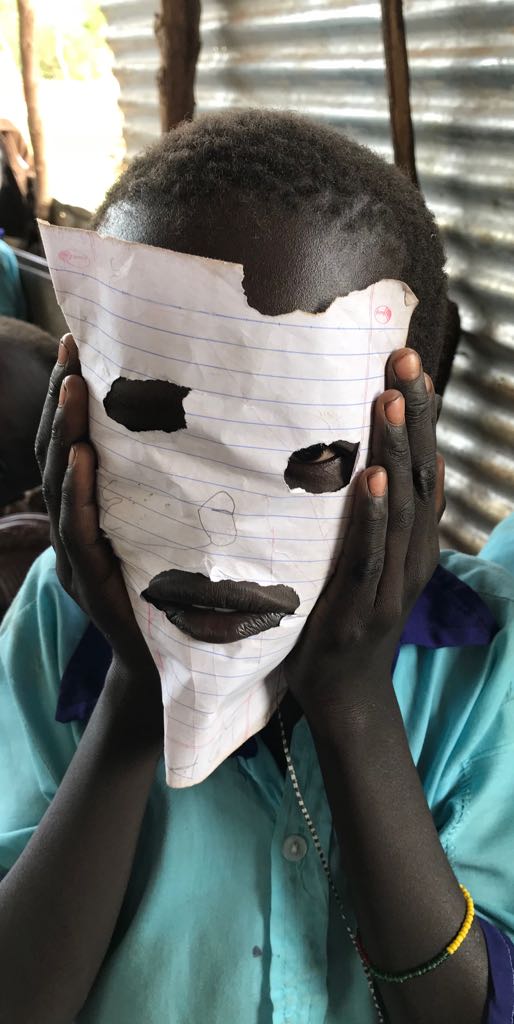 They were far more curious in how I looked than in what i had to say most of which had to go through translation anyway. It probably was a boring lesson. But I got endless joy when I saw a group of boys at the back of the class room who were not in the slightest bit interested in the Lord's prayer or what i had to say about it. Rather their minds and creativity were in overdrive as they tried to figure out this 'white man thing' and in a flash they had come up with the Kayaja mask! I could hardly contain my admiration for their creativity and active minds! Thy Kingdom Come